I love telling stories. I’m actually pretty good at it…get a glass or two of wine in me at a party and I’ll tell you about the time a seeing-eye-dog-in-training licked poop off DK in an airport bathroom with more colour and enthusiasm than Stuart McLean.

In this, the apple didn’t fall too far from the tree because my dad is also a great story teller. I remember when I was a kid asking my dad to tell me a story and he’d make one up on the spot (or at least I thought he did). One particularly memorable one involved baby Heather with the hiccoughs and everytime she hiccoughed, she’d float little by little towards the ceiling. Her family members and neighbours all tried to pull her down until everyone she knew was hanging on for dear life, down in one long line from her shoe. Just when they thought all hope was lost, little baby Heather farted and everyone came tumbling down to earth. Everyone laughed and laughed and laughed at the fart and lived happily ever after. Now I’m not sure if this is a Jim Dunphy original (it definitely has elements of a scene from Charlie and the Chocolate factory), but that’s not important – I thought it was hilarious and I loved hearing this story. Thinking about that now has made me reflect on doing the same thing for DK and baby V.

I honestly haven’t really tried coming up with anything decent yet – it’s hard to come up with a story on the fly that a kid will like that has a beginning, a middle and an end. I can’t just tell him about that time I accidentally shaved off my eyebrows. A few days ago, in a desperate bid to get him to agree to take a bath, I said “Let’s play the three billy cars!

“Gruff!”, exclaimed DK excitedly, plunking his butt down in the bath water that two seconds before was “too hot! Too cold! Too wet!” He gathered three cars up quickly and I grabbed his tow truck.

“Under the bridge lived a troll who was as mean as he was ugly!” DK continued, quoting our version of The Three Billy Goats Gruff by Paul Galdone word-for-word.

“A tow troll!” I said, shaking the little blue tow truck and giving an evil laugh.

DK drove a yellow car along the bath tub’s edge.

“WHO’S THAT TRIPPING OVER MY BRIDGE?!” DK screeched in his raspy “troll” voice, bouncing and smiling in the tub in excitement.

“It’s only I, the first billy car and I’m going to the gas station to make myself fat!” I said.

DK mumbled and looked at me, not quite sure what the “tow troll” should say next. So I prompted him,

The tow troll chased the little yellow car around the tub and then finally gave up, very tired. DK, shrieked with delight the entire time.

And so we continued through the rest of the tale of the Three Billy Goats Gruff. And then we did it again, because, 2 year olds.

I had stumbled upon a way to play with my kid that doesn’t make me want to scratch out my eyeballs, at least the first time through the fairytale skit, because I’m not grasping at straws coming up with things for my character to say. Don’t get me wrong, role playing banal conversational exchanges like, “how are you today?” “I’m good how are you?” “Do you want to play with me?”, are important role-playing exchanges for developing conversational skills with a preschooler…but I can only take so much of that. Re-enacting our favourite stories in play is something I do find enjoyable and I don’t think I am alone here.

Telling tales orally is a rich human tradition. We have been passing down stories orally to one another for thousands of years. Before the inventions of the written word and printing presses, we had no other choice, bedtime stories were oral narrations. The fairytales and nursery rhymes we recite to our children today are the same ones parents on the English Isles and Northern Europe told their kids over centuries. Around the world, different cultures have their own rhymes and oral tales that they have been telling children over generations. Telling stories to our children seems to be an intrinsic part of parenthood.

Charlotte Mason recognized that oral tales were one way humans had been learning for millennia and a core part of her educational philosophy is “narration” wherein a child explains in his own words what he just read, either orally (grades 1-3) or written (4+6). Mason writes,

“Education…demands a conscious mental effort…the mental effort of telling again that which has been read or heard. That is how we all learn, we tell again, to ourselves if need be, the matter we wish to retain, the sermon, the lecture, the conversation. The method is as old as the mind of man, the distressful fact is that it has been made so little use of in general education.” (Vol. 6, pp. 159-60)

Telling back in your own words what you just read or had read to you requires active listening/reading, focus and attention. It requires comprehension of the text. Along with printing, narration is the first step to learning how to write and compose. We know from modern educational research that we remember hardly anything of what we read or hear, but we remember a lot more of what we teach to others. Storytelling (the art of telling a story from memory) is one form of narration.

Not only does telling a story from memory help cement it in the storyteller’s mind, the personal interaction with your child is memorable for them. 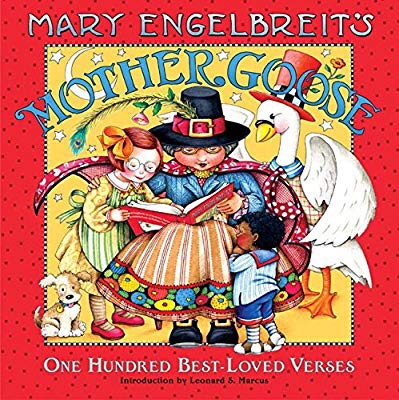 DK and I had already been reading a couple of books of nursery rhymes (I like Mary Englebright’s versions because I love her illustrations) and age-appropriate  fairytales (I really like Paul Galdone’s fairytale book series), but I wanted to try just telling them orally without the book or props in front of me, to see how DK reacted. I re-read a few of our fairytales by myself one night and practiced the structure of the story in my head. Often fairytales have lots of repetition, which is loved and needed for preschoolers. So I figured out what I needed to repeat to make sure I had the basic structure right. He loved hearing me tell a story he was already familiar with in my own words and it was fun because I could add my own spice to the story – changing the name Goldilocks to DKeylocks, for example. He listened with rapt attention and an energetic thrill to be a character in the story. I won’t know for a few more years, but I also hypothesize that hearing me retell familiar stories will also help him in his storytelling abilities when he is 5.

So now I have to practice some more tales and expand my roster!

What about you, dear reader? Do you have some favourite stories you like to tell your kids? How do you incorporate tales from your childhood into your child’s life?

I am a new mom and Canadian expat living in Silicon Valley with my 6 month old son and my 36 year old husband. I've declared 2017 the year for learning and for adventure and for making my home just a little bit more whimsical. View all posts by rinkydinkmum

RinkydinkMum strives to be an ad-free, listical-free and click-bait-free publishing blog where readers will find thoughtfully written pieces about motherhood, womanhood, and life-long learning. In 2020, the internet is full of emotionally-charged, quickly written, short articles. We at RinkyDinkMum want better for ourselves and our readers. We aim to be thoughtful, informed, humble, open-minded, and kind.

“Education is an atmosphere, a discipline, a life” – Charlotte Mason